Take a tour of our school!

Welcome to the ESRM 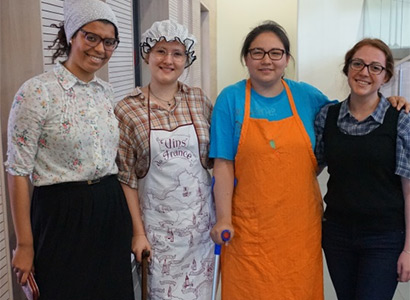 01.06.2016 In order to grab attention and cause a little fun and games in school during the last few days before the BAC the S7 students held a motto week. The aim was to all come to school dressed up on five days in five different themed outfits.
Monday started with motto: old age pensioners, Tuesday childhood heroes, Wednesday hippy, Thursday Chavs and Friday pyjamas
The students had lots of fun getting dressed up as you can see from the photos. 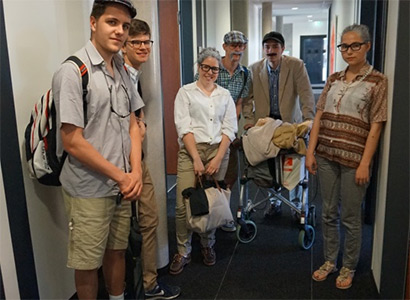 Tuesday, 24.05.2016 was the last day of school for our S7 students. As is the tradition in all European Schools on this day pranks are played. The aim was to leave a lasting impression on all teachers and staff.
They planned in secret so that nobody knew what to expect. To ensure that it was a surprise the S7 students met at 4 o’clock in the morning at school to get everything ready.
The Motto was: blue - inside and out. The students were dressed and made up accordingly.

These are some of the BAC pranks:

An allround unforgettable day which will be remembered for a long time to come.

Of course we could not do without the traditional Abi-Posters on which parents, friends and relations wish the students luck. This is a nice tradition which is not widely known in other European Schools but has now been established in Bad Vilbel.
On the fence in front of the sports courts these were secretly hung up over the long weekend before the start of the BAC. Tom Zijlstra also gave hands-on assistance in hanging the posters up.

The first year at the European School are sitting the European Baccalauréat. The European Baccalauréat is an exam recognised by all EU countries and only granted to graduates of European Schools. There are a total of 54 students taking the exam from two classes of the German and one class of the English and Spanish sections. Next year there will be almost double this number which speaks for the great popularity with parents of the European School system.
Similar to the German Abitur, there are written and oral exams. The students sit the exams at separate desks in the sports hall which has been equipped for this purpose. The exams are taken according to an exact timetable.

The same exams are taken in all European Schools to the same timetable and according to the same rules. Each school is also allocated a Vice President to supervise the school during exam time.
Asked about the general mood Tom Zijlstra, Director of the European School, stated: “Our students have been well-prepared for the BAC and are relaxed. After all our students have been sitting this kind of exams for years and are well-acquainted with exams lasting several hours”.

After the last oral exam at the end of June the Proclamation of the European Baccalauréat will take place. At this ceremony the BAC diplomas will be formally presented to the students by the Directors Tom Zijlstra and Gitta Lotz. In addition to the Directors the Deputy Secretary General of the Board of Governors of the European Schools and many other guests of honour will attend the ceremony. Of course the parents and grandparents of our first Bacheliers are also invited to share this great occasion in the lives of their children.

To our organiser Ute Hartmann, who has been planning and organising the BAC in minute detail for the last few months. We would like to express our heartfelt thanks to Ms Hartmann for her great achievement in ensuring a smooth and professional running of the examinations.

The BAC organisation team (from left):

James Connor, Head of Upper Secondary
Ute Hartmann, PA and Chief Organiser of the first BAC at ESRM
Stefan Walz, Secondary School Inspector for all European Schools in Germany and Deputy President of the European Baccelaureat at ESRM